Tis an ill cook that cannot lick his own fingers

I love food, to begin with. Usually I live to eat but, as I’m sure many Return to Work Mothers will agree, cooking the meal at the end of the day can be the last thing that you need, to say the least.

I give a far bigger (inward) groan towards the thought of menu planning though. One of the bonuses of my previous career was when I climbed enough rungs up the ladder to be joined by a Chef who took over that distinct tedium. Planning the food for the week as a Mum, you have to factor in the ‘I don’t like that’ or ‘I’m going out with my mates, I’ll have it later’ and the ‘I went for a quick drink after work, I’ll have mine tomorrow’ members of the family. Additionally, I also consider a limit on meat, the colours and textures on the plate, the costs involved, what leftovers I have and, on more occasions than there should be, ‘I really can’t be bothered tonight.’


Does any of this sound familiar? Last week I thought that I might not be alone so, today’s To Start the Week blog features a roundup of the food I cooked. If nothing else, I hope it may provide a bit of inspiration OR a little reassurance that, whilst we may not lick our own fingers, if the family enjoy our food, we certainly won’t feel as sick as a parrot as our efforts weren't in vain!

Monday
I don't throw away leftover Sunday roast vegetables and I added the carrots and romanesco (broccoli/cauli-type combo) to these (roasted) red peppers, that were in the back of the fridge. All  tossed together with cooked macaroni and a cheese sauce that used up the left over Red Leicester from the cheeseboard. The result was a veggie macaroni cheese that was devoured. ﻿﻿Tuesday
I still had some (Sunday lunch) curly kale and peas left over, so I made a quiche, adding a
couple of sliced spring onions, the last of the cheeseboard Gorgonzola and used up the cream that had been left over from the pudding. I roasted some cherry tomatoes in the same oven as the quiche (economy) and did a white wine vinaigrette to toss the green (lettuce!) salad in. 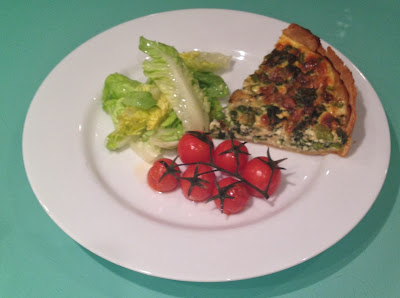 Wednesday
I was having a 'can't be bothered' day. I should have gone out shopping but the weather, and my mood, was taking a bit of a mid-week dive. So, it was to the store cupboard I opened. I made some leek and potato farl-type cakes, blipped up some home made 'baked' beans (tin each of cannellini beans and chopped tomatoes, onion, vinegar, brown sugar and a few herbs) and grilled off the last of some streaky bacon. 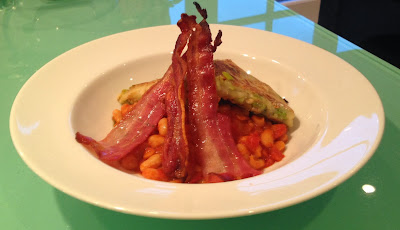 Thursday
Another 'fed-up' day, as hinted on in my Something for the Weekend blog. So there was no adding to any supermarket pockets from me today! Instead I toasted off the remaining half of a packet of almonds and added them to couscous. I always use stock to flavour this up and usually loads of salad vegetables that I chop up small to con the giants into eating with relish. But the salad drawer was bare so I sliced a butternut squash in half (rest tomorrow), opened a tin each of butter beans and chopped tomatoes and added a chopped chilli to warm us all up. And all that was left was this sad little bowl of couscous. Don't worry, with a teenager in the house, it wasn't left alone for long! 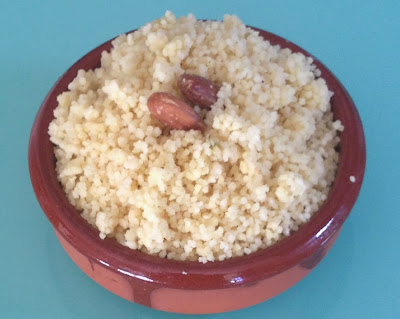 Friday
Officially the only 'planned' meal of the week! Butternut Squash and (Squeaky) Bean Thai Curry. With a base of bashed up and sweated onion, chilli, ginger & lime, sweet basil and coriander leaves, simmered in coconut milk to cook through and a few prawn crackers on the side. Let the weekend begin! 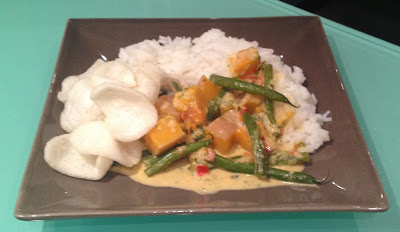