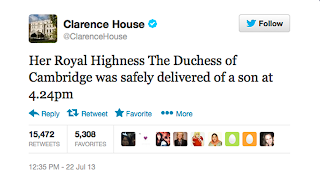 Using Social Media energises me but its powerful, unyielding and surging nature can both horrify and alarm me too.

Whether you are a Bajan pop goddess or a 16 year old Youth Commissioner in waiting, it can make and destroy reputations in its path. Is it the Minotaur of the internet world?

Likewise many businesses – from titchy to blue chip, either shudder with ignorance or try valiantly to break in this metaphorical stallion. For me, one of the most visual examples of its strength and one I'm sure many of us would have been part of, happened on the 22nd July 2013.

On the hottest day of the year, a Prince and future King was born. The world was in a frenzy, vying to be the first to take a picture, learn the gender or a name. First, first, first was de rigour (nod to London Fashion Week there).

But what of social media - this medium that aspires to be premier in viral-ity?

This time it had lost the swerve on the control button and journalists were forced to practice its backbone of re-hashing the same news repeatedly throughout the day. And when I say re-hashing, you can take it as both the slang and the symbolic tagging here.

But there remained we masses, trawling and waiting as eagerly for the news as for the deluge that cooled the temperature of the night ahead. Despite the same old news, we continued to connect. Until the previously insisted (the announcement will not be made online) method of proclamation was consigned to a vintage 19 minute time delay. Instead an email and a tweet prevailed over tradition.

And there lies the key. For social media to succeed you must give your audience something that interests and connects them. If you achieve that, they may keep with you on your journey and be listening out for what you could be saying next.

Still not convinced? Take a link to how ASOS is an example of a business that has benefited from this powerful medium (but for how long?). What ever your reason for reaching out, why not give it a try? You could be a world wide spider before you know it!

Today I will be pausing to respect and remember all those who have died in conflict.
This blog is dedicated to my father, who I will also be thinking about today. X