Festivities moving forward to the end of a year 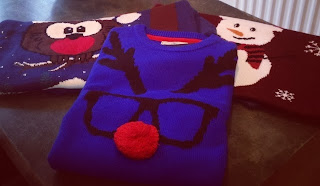 It's a little stressful at this time of year, especially as I have two Christmas babies - er, I mean giants. I know most of you (and I don't think I'd be too far out of order to suggest the majority are female?) will be reaching the whistling stage on the pressure cooker-o-meter.
Christmas, for me, always includes lists. Card/Present/Food Lists. Then, I usually get the additional Birthday and Christmas Wish list from the youngest giant (in September) which is promptly succeeded by at least three altered lists, before I call a halt; on the strike of December. That tradition started the first Christmas that little giant could write.
Following on from my Christmas Decoration and Christmas Carol tradition I suppose I could add lists and mental deadlines as the next step on my tradition pathway. This year's 'new tradition' is the Christmas jumper. A year ago, if someone had suggested that the house would be filled today with Jumper wearing giants, I would have laughed my new Christmas slipper socks off!
I am very mindful that many of you will have found your circumstances have changed in the last twelve months, and not necessarily for the better. It's at this point I also start thinking about what has happened to our family through the year and wondering, with trepidation, what the new one holds.
For those of you who are facing Christmas with excitement and warmth of spirit - I am mightily happy for you - enjoy!
For those of you who are struggling to cope in any shape or form, can I introduce you to James Gray. Don't you think that is the saddest most poignant link? If I were him, I would certainly be thinking "is it A Wonderful Life ?"
My Father used to say that if you have a problem, it won't seem as bad in six months time. I feel a bit reluctant to write that though, knowing people who really are going through sad and desperate times. But surely we shouldn't give up on hope, if this is the case? Surely, if we give it a go, things could improve? Even if, at first, we might think "What's the point?"

This week's blog is dedicated to John who was known as Steve (because I could never watch It's a Wonderful Life without thinking of you) and yes, I have sent James a Christmas card - will you?