The Force of Nature 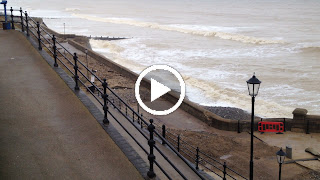 Last weekend we had a scheduled visit to the North Norfolk coast. When we arrived we were amongst a small crowd watching the force of the third tidal surge buffeting the sea defences and promenade of Cromer seafront. The waves were reaching in excess of nine metres high.
We had heard that the pier was closed and Twitter had documented evidence and eye witness reports the night before. Some had likened the devastation to a war zone. Having never experienced that, I wouldn’t like to pass judgement but I would say it was a very sobering site, the next morning.
Chalets had been broken up like kindling. 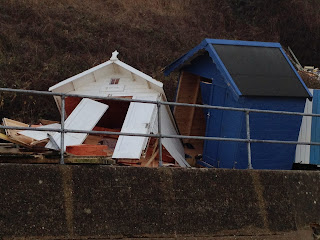 Doors and windows had been ripped off and the contents had been swept to all places east and beyond, twisted and mangled beyond recognition and use. 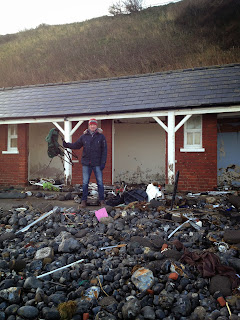 The Theatre was unusable, with the sea flowing into the bar. The Christmas show had only just started for the season.
The summer turned out to be a good one, weather wise, and I hope that income had mirrored this. I imagine that all profits will now have to be ploughed into replacing and repairing. The misery was etched in the faces of those picking and clearing through the debris.
Humans can be very resilient but how you get over the devastation of your property, business or, as at Hemsby, your house falling into the sea, I don’t know. 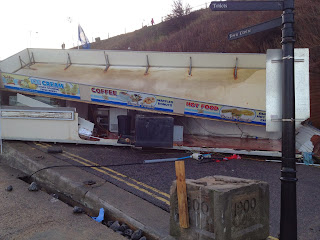 Linking back to the Cromer Christmas Show, the saying ‘the show must go on’ seems very apt, because that is what has happened. A week later, and with obvious determination and stoicism, the show has re-opened and is reaching the end of its second performance as I type this post.
So, this weekend, we will return to North Norfolk and support the local shops and hostelries, in an effort to make all the hard work a little worthwhile.
How about you?