The Ideal of a Free Society

I was six years old the day that I first stepped onto South African soil. On a journey to the Far East, our ship had docked in Cape Town harbour. With hindsight, it was presumably to take on fuel and supplies but for me, it was so that I could go to the top of a very big hill that had had its top sliced off. I had never seen a mountain before, by the way.

There are three things that I have held onto from that day.

The first is that when you are on the top of Table Mountain, it’s not very flat at all. I would have broken bones if I had tried to run over it, which is what I wanted to do.

The second, when you look down into the bay, you can see the waves breaking on the shore. It doesn’t actually look like they’re moving, it is just one long line of froth. I stood there mesmerised; for ages. The third, makes me weep to this day.

The Cable Car broke down. We were stuck on the top of Table Mountain and our ship, which we could see below, was due to sail that evening. Without us.

With a movie-like script the cable car problem was fixed, in time for the women and children to descend first. Arriving tired and hungry on the quayside we were hurried along to board the ship and it was then, with the curiosity of a child and being a ‘good reader,' I saw the notice:

"Why Mummy, Why?" I can’t remember how my Mother answered that one. There couldn’t be an explanation to something that, even to a white middle class six year old English girl, was wrong, so very, very wrong.

Researching this blog I came across Mike Bennett. I think I have something in common with Mike Bennett and it’s not writing songs!

I would suggest that unless you see a notice like that, you cannot understand the lifelong gut wrenching vulgarity that it caused me. But that notice went on to shape the adult I became. I remain as abhorrent of injustice and prejudice as on that day, all those years ago.

Which is why, on Friday 5th December, as I went to bed, I shed a few tears for former Robben Island prisoner 46664 because without him, we would not have seen a photograph like this 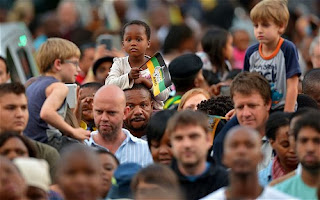 I know little of the politics but I do know that Nelson Mandela was a human being who orchestrated some good, good things. May his cherished soul rest in the peace.

Thanks to Getty images and the Telegraph for the perficpics