Living the (not such a) Teenage Dream 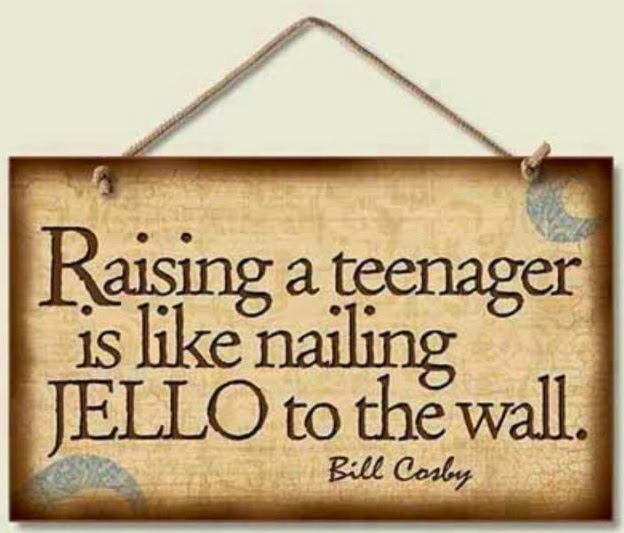 Last week a friend asked me if I had any advice on dealing with teenagers. Yes, I did choke and question their sanity – a child relationship guru, I am not. However, I remembered the desperation that I felt when I was being battered around the mental angst cave by the unknown entity: Teenager.

I’m not being indiscreet here. We all know the connections between birth (ouch); new born babies (exhaustion); two year olds (terrible) and with teenagers - angst.

I understood that the hormones were taking over their bodies, causing their height, shape, hair and voice to alter unrecognisably and this surge wasn’t just fixed to a (girly) once a month event. The uniformity of all boys being a similar height and generally shorter than most girls their age, was blasted (overnight) by a mish-mash of croaky voiced Osgood-Schlatter inflicted bodies, with a cake topped icing of red angry pustule sprinkles! Who wouldn’t have problems dealing with that?

However, I was horrified when I realised that the result caused by the difficulty in communicating with someone who was … unpleasant to communicate with, was no communication at all. To keep the status quo it was easier to say nothing, put my head down and just get on with it. It dawned on me though, that this could result in exiting the cave at the other end with no groundwork for communication left at all. That it’s ashes had been left beside the smouldering embers, in said cave, about four years prior.

I knew I had to act and my action was to ‘phone up and book LSH and I on a Living with Teenagers course. It was brilliant, not only for reassurance and guidance but to see that the faces of the other desperate parent attendees had the same ‘how am I failing with my former darling child’ bewildered stare. Unfortunately, I think cutbacks have probably knocked a lot of these courses off the Council priorities list – but it’s worth a try googling as some still do.

At the peak of our angst period the only written material on the subject was a ‘withdrawn from Jersey library, sold as seen’ copy of Adolescence: The Survival Guide for Parents and Teenagers by Elizabeth Fenwick and Dr Tony Smith, 1993. It says it all that Liz and Tony thought that teenagers would be grateful for that type of bedtime reading. Be assured there’s more out there for you now.

So, high five to you if you are still communicating, but if you’re struggling, don’t be a hero – seek out assistance and take some possible future comfort in the possibility that if you have a younger pre-teen, you may well have a secret weapon (if you've held onto your communication link). Your eldest can assist younger sibling teenager through their future rocky puberty road and in so doing, can inform them that they have the worst parents in the world – who have the belief that they have ownership of the angst card!