Paula Yates was my Icon

There. I've said it. And proud of the fact I am too.

I don’t know why I’ve been thinking about her lately. Maybe it’s because of the publicity for the forthcoming Boomtown Rats tour or because of Peaches* recent jaw dropping handling of Ms K Hopkins. Either way, Paula’s been very much in my thoughts and I felt the urge to mark this revelation in blog land.

She cemented an impact on me when I saw a Cosmopolitan article with her posing in an Emanuel shepherdess-style dress. Typically, magazines featured heavily in my life then too. David and Elizabeth were the height of royal (not punk princess) fashion and Paula, always having an irreverent, sassy attitude, had a look that seemed to say ‘ha, bet you didn't expect me to be wearing something like this, did ya?’
Certainly, I never expected to hear her extolling the virtues of the WI either, this resulting from her new found lady of the Kent Priory status. I missed out on her displaying her coquettish wiles to the viewing hounds on The Tube and Big Breakfast; my by-product of long working hours and sleepless baby nights. Likewise, this editorial was the polar opposite to what a professional girl expected between the sexually educating covers of the shock magazine of the time. Only Paula could shock by being shockingly traditional in the source of shock!
She was everything that I would have liked to have had a stab at - in another life. Bleached and cropped blonde hair, she voiced what she thought and kept you guessing as to where she was coming from next. Even her Jasper Conran wedding dress did a finger salute to what you would expect from both the designer and a bridal gown. And how many brides surround themselves with so many 'it' men of the day? 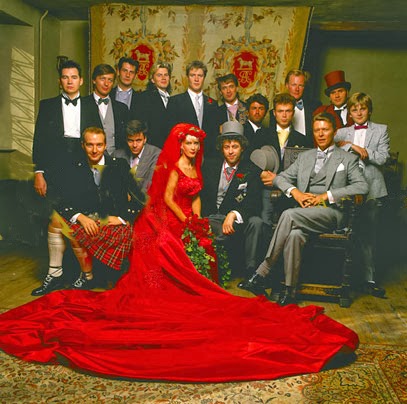 Three fabulously named daughters later and it all started to fragment. A fateful interview on a bed seemed to start the time bomb ticking. Watching the YouTube link, in my research for this little muse, I felt uncomfortable and voyeuristic. I didn’t continue to the end.
Through youth and style and lust and love and anguish and birth and heartbreak and death and treachery and destruction it all came to a full stop.
In tragic times and with heart breaking consequences, I know exactly where I was when I heard she'd been found. A 21st Century Ophelia, pulled to a muddied death. 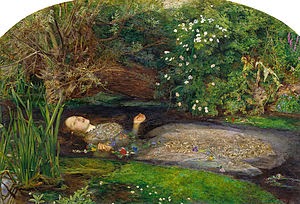 And why am I labelling this as Something for the Weekend? Well, I think that the weekend should always allow the opportunity to do something just that little bit different. A bit left field, if you so choose. And that's something that Paula always seemed to do, albeit with wretched consequences, where I draw the emulation line.

*since this post was published, the tragic loss of Peaches can only highlight the sadness that is left behind by those who love :(
thanks to mediacache, tate britain and misspennydreadful for the perficpics