Being a mother of two giants, I’m sure you will appreciate my horror at the emergence of the latest ‘craze’ of NekNomination. As I write this post a fifth death has been recorded from this ‘show who’s the boss’ task.

Society is braying about the lunacy of this trend and I would lay out my cards and call Horrified but Realistic.
I have little doubt that there’s a possibility our giants have picked up this pint glass relay challenge – passing on the lethal cocktail baton to mates who should ‘man up’.

Keiran Hunter ‘man’d up’ and the result was posted on Facebook, by his Mother. This might have been a bonus for him, because he’d already had three attempts to provide the eventual filmed evidence - and after three pints of necking, he was in no fit state to post and share to his friends as well. 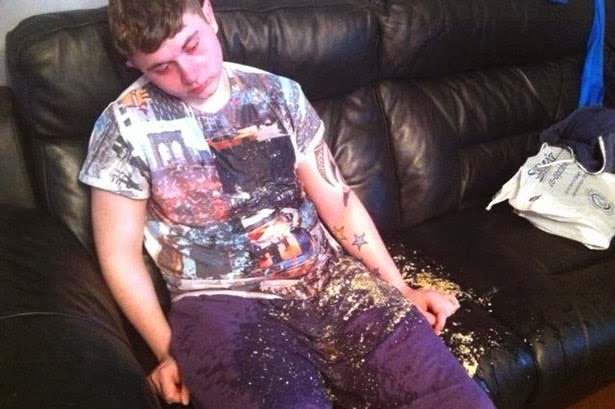 Nice isn’t it? My heart goes out to his Mum and also to any future employers who may judge Keiran from this photograph. As I’ve said before, the power of social. This photo had 15000 shares within hours.

I would ask said prospective employers to question:

Because, here’s my point, how do the participants afford their cocktail anyway?

Well, having checked this out online, I can confirm that I know the best place to source the cheapest Vodka, Rum, Whisky or Gin. Price check over, I could have a cheap pint of lethal cocktail for £10. What a bargain!

Not to our cash strapped NHS it’s not; many of whose bigwigs continue to shout for minimum pricing - falling on the 'deaf' ears of Government, they cry.

So, until this ‘crazy drinking game’ fizzles out or boomerangs back from whence it came, we parents will have an extra worry to shoulder. Unless, of course, more nominees take a leaf out of Adam Davidson’s or Brent Lindeque's book.

Either that or the realisation dawns that the suggestion that NekNomination provides any rite of passage, is a lie. The video recording of the drinking will provide a visual record for both the participant, their friends and any future viewers' benefit. And sex? Well, don’t think there’s any of that for a while after the crazy event.  Cheers!

thanks to the Daily Record for the photo of Keiran