We Will Remember Them

Last Friday, the sixth of June, saw the dawn of the 70th Anniversary of the D-Day landings.

I have always been aware of this event, which saw a flotilla of nearly 14 thousand vessels, large and small, provide a united multi-national attack and move towards the ‘beginning of the end’ of WWII. However, I knew little more than that.

The events surrounding the commemoration of the day provided me with enough petit point stitching to provide a vivid tapestry of the truth, the suffering and the cost to human life. Selfless sacrifices, which altered the path of history, from one that is of unimaginable consideration.

I expect we will all now be moved forward to the events surrounding the 100th anniversary of the start of WWI and it is here that I would like to tell you why I am so delighted that we are honouring those who fought for King and Country, and their achievements haven't just been swept into a closed history book.

I’ve spoken about my BC hospitality career, in a previous post. One of our annual events was a lunch to honour the Post Office Rifles, held on the Saturday before Armistice Day (and normally coinciding with the Lord Mayor’s Show).

Due to the dwindling numbers of veterans, which mirrored those at the D-day Anniversary parade, the recently appointed (irascible and demanding) Postmaster, had instructed that the Catering was altered from a silver service luncheon, to a light buffet. He also decreed that it would be relocated to the General Post Office Building, from the dour Function Hall. 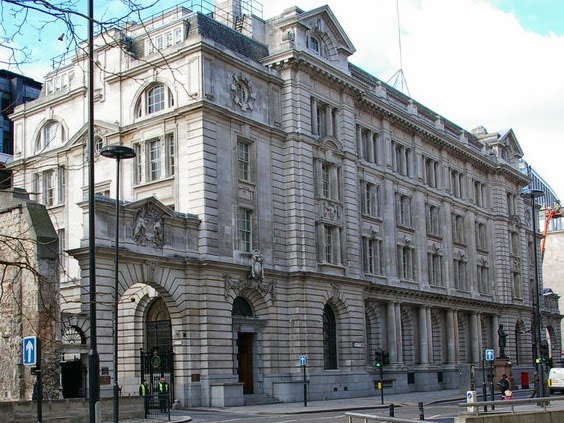 As far as I was concerned, this was a stroke of genius – Sir Henry Tanner’s architecture would provide an imposing backdrop to honour the handful of remaining veterans.

Logistically, it was a nightmare though. Transporting food, beverages and tableware, for 80+ people (with full consideration for the legalities of the food hygiene and food safety laws and regulations), whilst vying for the use of goods lifts (whose primary purpose was transportation for the City’s mail), was almost a military operation in itself.

Nevertheless, all was achieved to deadline and as I stood at the entrance, looking towards the far window and the stretch of white tablecloth laden with morsels to satiate and wine to toast, I felt the surge of relief and accomplishment, that we all feel when we’ve achieved a ‘job well done’.

I remember feeling a presence next to me and realised that the Postmaster had arrived to check that all was ok.

CK:  Thank you, the lifts were a little tricky to negotiate

PM:  Well, I do question why we're still continuing with this event. It’s a lot of organisation and an added expense, when there are only one or two veterans left to attend


He was well intentioned but this comment reflected a growing impression, that I'd become aware of, that people seemed to be thinking the commemoration of this chapter of history, should be faded out - it was too long ago.

Now, the Postmaster was all I’ve described him to be but I respected and liked him.

This may have been because, shortly after he had started his new role, he'd made a firm request that I took responsibility for his welcome dinner (an awkward compliment and more of another time) and future functions.

Additionally though, I related to his determination for consistant high standards, it was something we had in common.

As I stood next to him, absorbing his comment, I felt that he was the Sergeant Major to my Private ranking. I had no alternative and turned to face him, straightening all 161cm of myself and looking him in the eyes said:

There was a moment's (awkward) pause, before he replied:

‘Fair enough, you have a point’ and he moved off to begin the reception.

As I watched him walk away, I saw a waitress called Amy start to guide and welcome the fragile veterans, with her usual welcoming smile. And my eyes filled with tears – just as they did last Friday.

For they did what they did, so that future generations could live in freedom and without fear.

We owe them so much, not least, our thanks and honour.