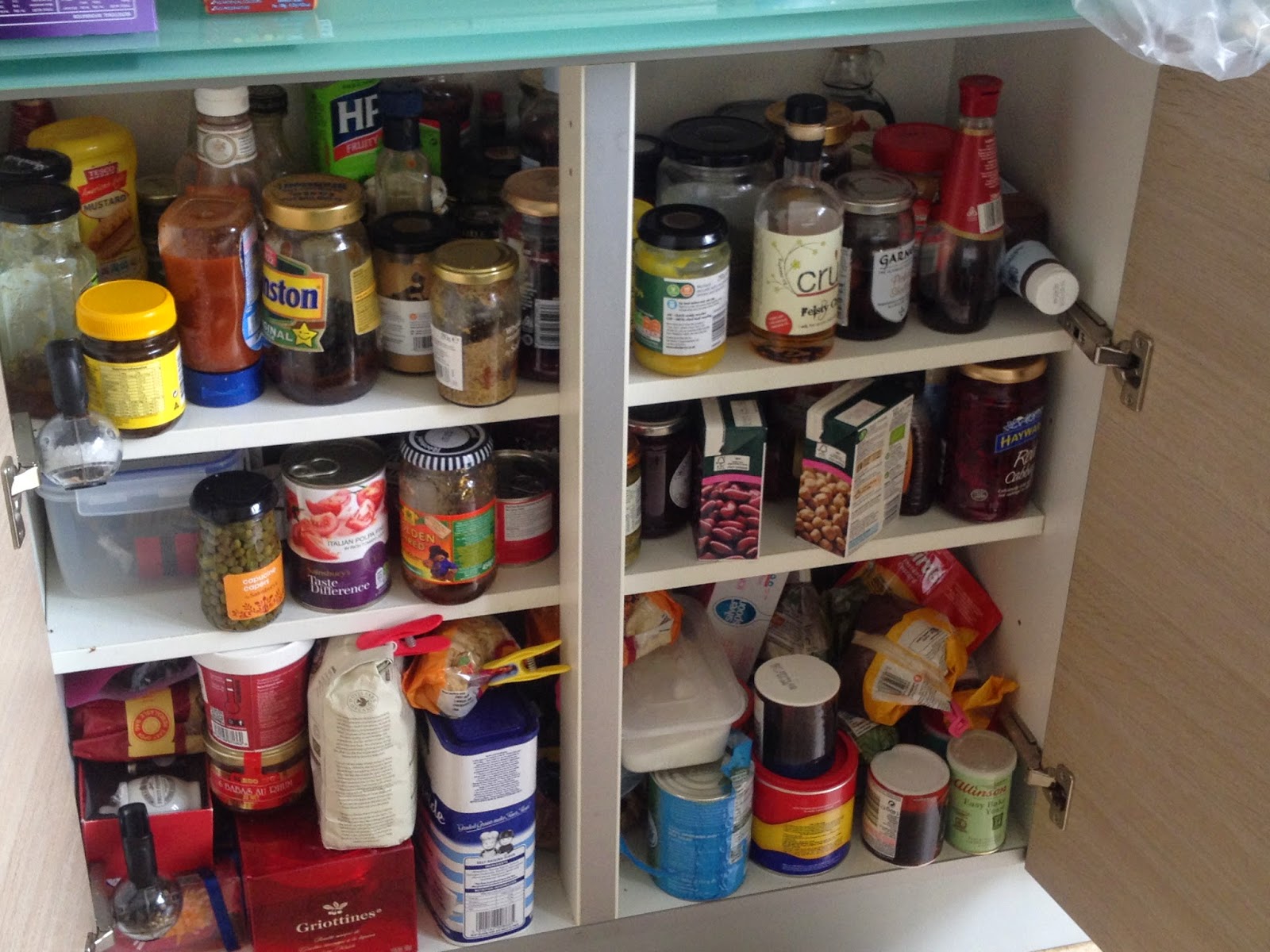 I was once asked, out of all the meals I'd cooked, which ones I enjoyed cooking most. Without thinking - I was probably cooking at the time - I answered 'Store Cupboard dishes'.
It was back in the days of pre-children, pre-ready, steady, cook and mid-hospitality career. My day job held the responsibility of feeding and watering 2.5k workers (let alone the additional functions and events), which would often leave me in a state of exhaustion that would only be topped by that provided by a future new-born baby!
So, in an oft drowsy and stressed state of mind, I would veg-out reading something from my increasing cookbook collection and watching thirtysomething, whilst wondering what life would be like with Ken Olin (and whether, if I ever had a baby daughter, I could call her Hope).
Fully primed with cookbook knowledge and professionally adept at menu planning, there was rarely a weekend that wouldn't hold a dinner party, in the Kitkat household. But it was the off-the-cuff visits where I had to rustle something up (to go with the wine served by LSH) that would really get my creative juices flowing.
With no pressure to deliver a 'you're in catering, aren't you Carrie' meal, I had the freedom to wave my elder wand and produce from the pantry; metaphorically crying 'Finite' to the constraints I imagined to be imposed, by the expectant guests.
The reason for these ramblings is that this week I have had an enjoyable foraging return into the depths of my kitchen cupboards and fridge corners. Initiated by laziness and a fed-up-with-the mornings-being-dark-now attitude; I just couldn't be bothered to go to the shops.
Well, I made some quite amazing discoveries!! Most, I have to say, provided by the delights of LSH's Sunday-cook-day responsibilities. Who knew that you would need two jars of preserved lemons and that Rose Harissa even existed, for example!
I’m sure you won’t be surprised to realise there was a whole Claudia Roden/Yotam Ottolenghi style going on here. So, and with a little help from my weekly veg box delivery, here are my offerings:
Cabbage Thoran & Spiced Tomato Aloo with a Basmati Rice Hug & Cooling Raita 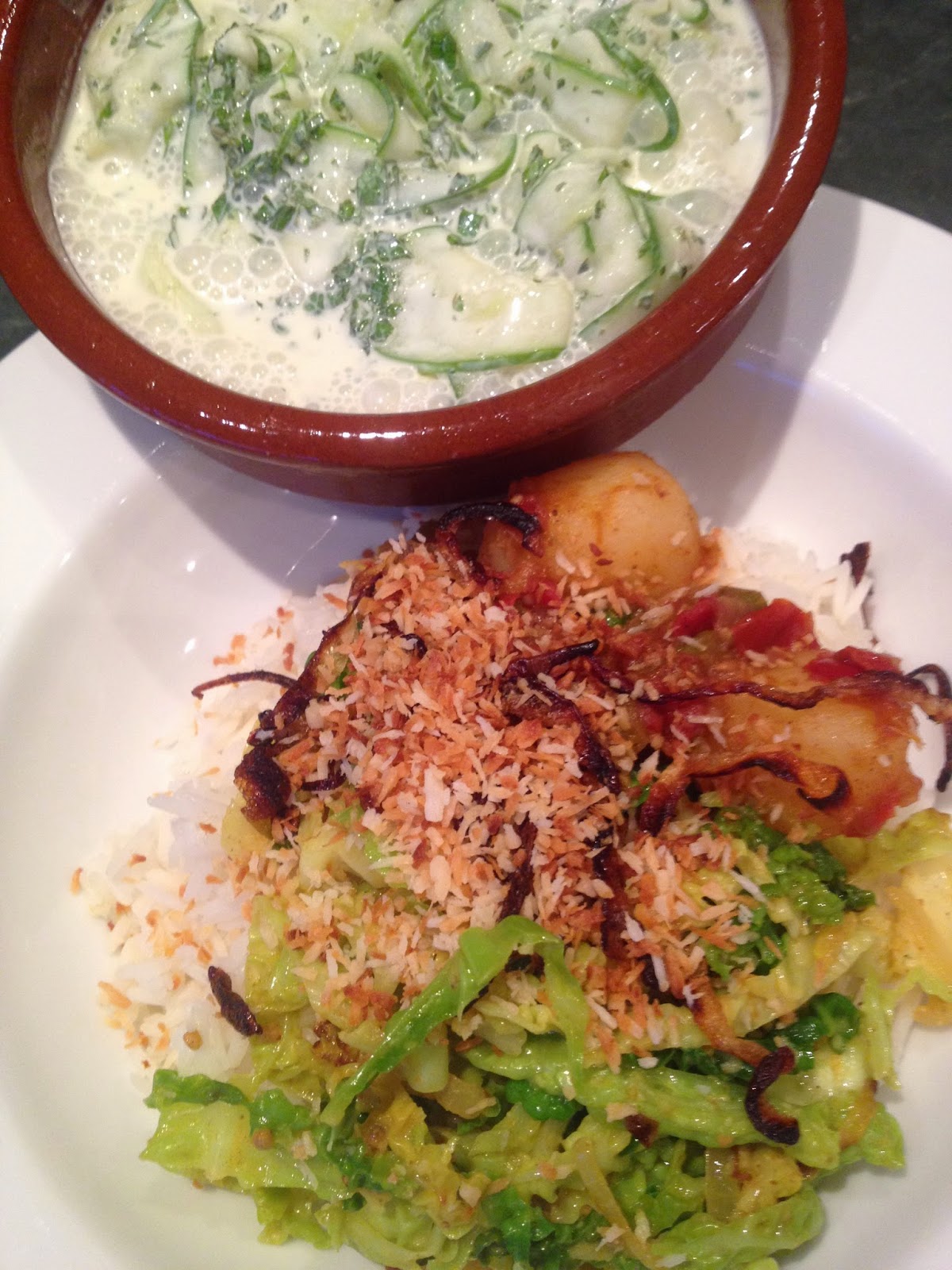 I had seen a recipe for Cabbage Thoran in my weekly veg box (together with the cabbage). Unfortunately, the company's online cataloguing is not akin to the quality of their produce. So, this is a recipe that seems similar.

My other pantry ingredients were: 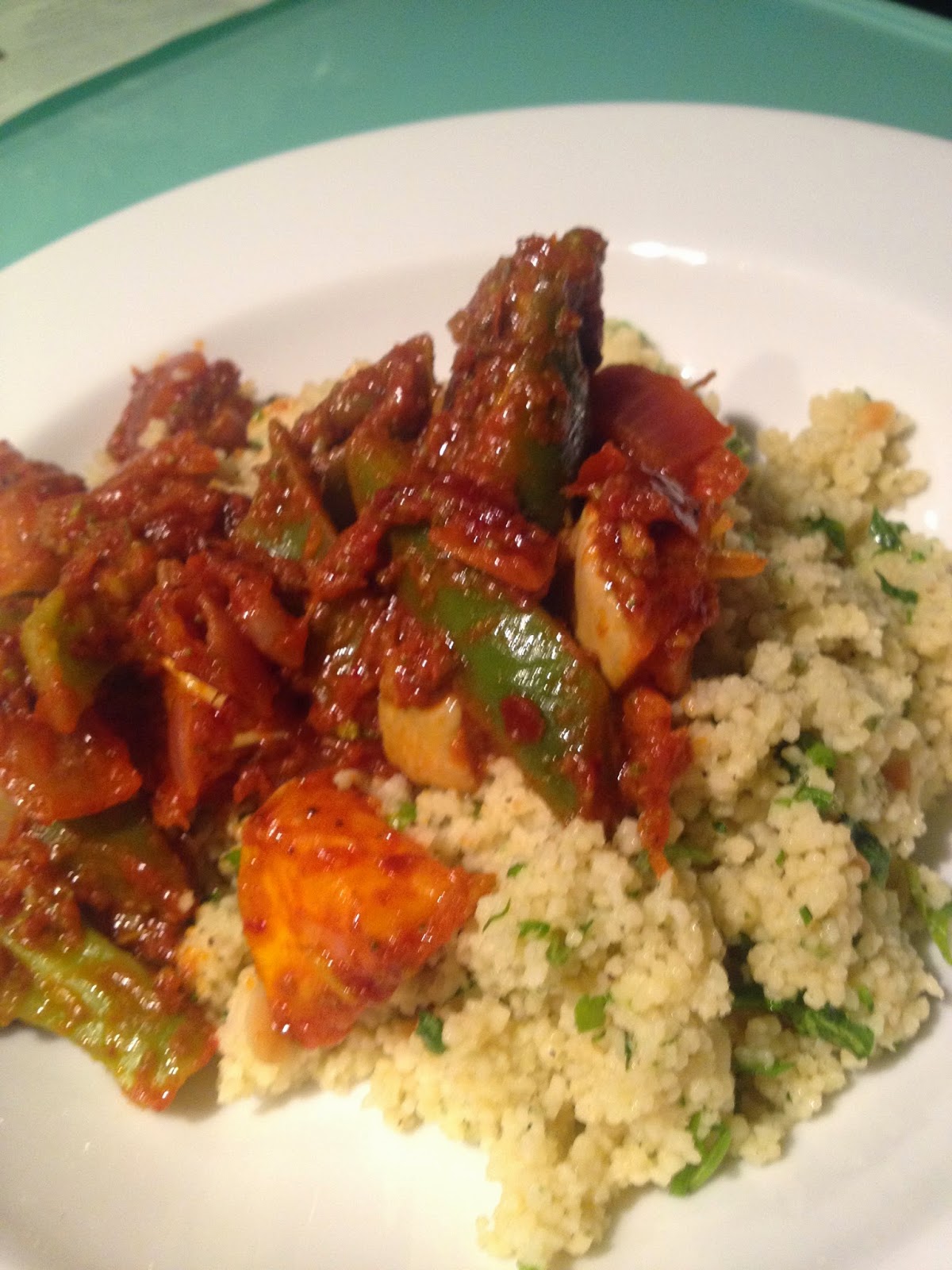 The giants took to couscous, which proved a fab way to 'force feed' veg into their unsuspecting tummies. The secret is, pack with flavour (otherwise it will be like eating chopped cardboard).

I always include portion-appropriate stock cubes into some saved veg water to begin the plumping. Adding chopped flavour improvers like cucumber, sweet peppers, celery, mint, coriander or nuts (from pine to walnut and hazelnuts) AND PLENTY OF SEASONING. This will help to pack the right flavour punch.

This time, I used the last of a packet of parsley, including stalks (garden produce long since purged #BadCropReplenishment) and toasted some sliced almonds, left over from making a bakewell tart. Not too many add ins as I believed there would be enough flavour in the smothering Ha-riss-ah pot that would encompass it.

My other pantry ingredients were:

and of course:
So there we are, enough of my ramblings ... do tell me though, am I the only one who has a pantry habit?

Labels: A bit of what you fancy, Food Inspiration, Pantry Meals, Return to work Mother, Something for the Weekend
Newer Post Older Post Home