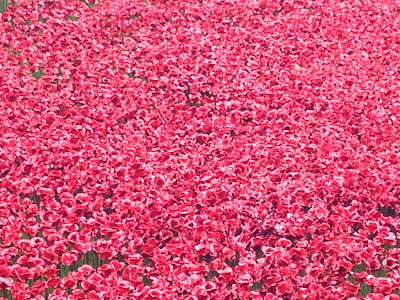 The blood-swept lands and seas of red, where angels fear to tread

We were up before dawn, starting our pilgrimage to the Tower of London.  It wasn’t difficult though, I feel there is always an ethereal beauty about an early weekend morning in our capital city.

This morning though, it was almost like we had disembarked and transformed into characters from a Lowry painting.

Dozens of us - all shapes, sizes, ages and demographic, walking in one direction with determined purpose, on this day, Remembrance Sunday, 2014.

I admit I felt uneasy, worrying about how I would react at the first sight of Paul Cummins’ and Tom Piper’s tribute to those individuals of the United Kingdom and the British Commonwealth, who died fighting in the First World War. I had already built up a certain amount of agitation in the pit of my stomach. Despite our early start, we knew there would be crowds obstructing and vying in adulating wonder. This was no place to become a blubbering mess!

Regular readers may remember that I have always held strong beliefs on honouring those who have died in conflict. I am fiercely proud of being British, abhor injustice and embrace egalitarianism.

The news of Jonathan Jones’ article had left me exasperated; filling column inches with detracting stuff and nonsense.
Everyone’s entitled to their opinion (or fifteen minutes of fame); freedom of speech is a beautiful part of being a Great Britain and social media is a great way to respond to detractors.

So there I was, peering over heads and ‘round shoulders and seeing this sea of red before one of London’s oldest and most iconic buildings and my overwhelming impression was that it was beautiful. Just so, stunningly, beautiful.

I became troubled – I realised that people were not only photographing the art installation, they were taking selfies in front of it. Some had even brought sticks to connect their ‘phones to, to get a better (higher) view of themselves, with the poppies behind them - smilingly documenting their time in London. Was this right? I wasn’t sure that it was respectful.

Then, an elderly couple asked if I could take a picture of them in front of the Weeping Window and it gave me a different perspective.

They were recording this event as it would undoubtedly be a once in a lifetime experience for them. The gentleman grumbled that he ‘never took a good photo’ and the lady dismissed this with a cajoling sentence.

I snapped the evidence that would bear witness to that moment for the rest of their lives and then took in all the other ‘moments’ that were developing around me. 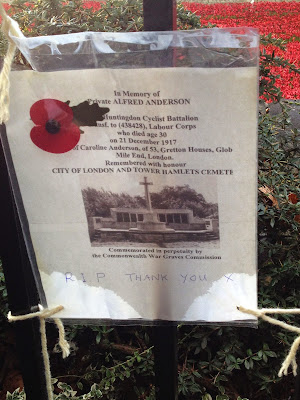 Big beefy men were surreptitiously dabbing at the damp corners of their eyes. Children ate apples or marshmallow sweets (tiding them over, and keeping them quiet, until breakfast) whilst reading the rain dampened tributes that had been secured to the railings. A hum of quiet and reverential chatter hung in the atmosphere, belying the number of people encompassed within the massing throng. 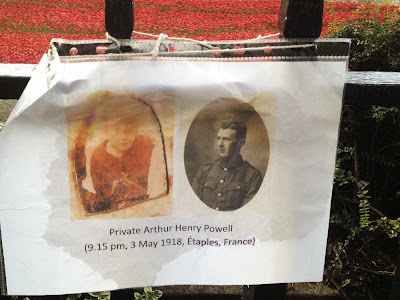 It is not without a wry smile that I consider how, through the medium of his art, Paul Cummins has managed to stir the breadth of emotions that would normally be reserved for something akin to reading the complete works of Shakespeare, all in one go.
Despite his dyslexia he, and his team, have had an impact on our nation … and beyond. 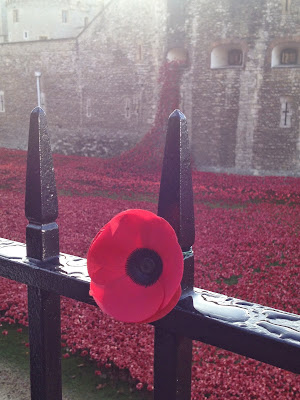 My lasting thought will be of trying to absorb the impact of almost 888246 poppies. It was too overwhelming and I just focussed on one, beautiful, exquisitely constructed poppy and I thought, with unlimited joy:
at the going down of the sun and in the morning:

We have remembered them